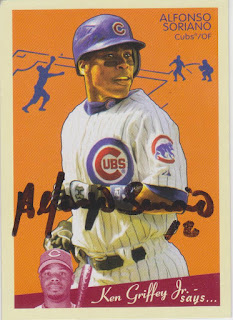 Last year, for a brief four month span, Alfonso Soriano was signing autographs through the mail. I noticed it in August. By Thanksgiving, it was over. Luckily, I sent this one card to him in the middle of October and I had it back before the honey hole dried up. I thought I might have been too late on the action, but it made it back home in about two weeks time.

It is always nice when a six time All Star starts randomly signing cards through the mail. But, I am sure that he got overwhelmed real quickly and that is why he gave it up. On SCN, there are probably over 125 successes listed on there and that is just from the people that bother to track their successes on the site. Who knows how many requests he actually got during that time.

Nonetheless, I was able to add an autograph to my favorite set from 2008 for a dollar in postage. I will take it.

Alfonso played in the Majors for sixteen seasons with the Yankees, Rangers, Nationals, and Cubs. Over that time, he hit .270 with 412 home runs and 1,159 RBI. He played in the postseason five times, including two World Series appearances. He had over 100 RBI four times and hit 30+ homers seven times, including a career high of 46 with the Nats in 2006.
at 8:46 AM