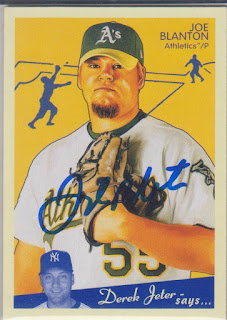 Here is a card that I got signed in Kansas City during Joe's brief stay with the Royals. It was a Sunday day game, which is autograph day at The K. Like most everything else that the Royals do that is autograph related, the event is poorly ran. You have to get to the park early so that you can make it into one of the two lines. Of course, you have no clue who is going to be signing, so it is a total crapshoot. Once you are in line, you have to stand there for thirty minutes before the players come out. Then, they only sign for about twenty minutes.

On this particular day, I got in one line and my wife and kid got in the other. The dude in my line ended up being a reliever that didn't have any cards. So, I got out of line. The other line had someone I needed, so my family stayed in it. Since it was autograph day, I didn't bring my book with me. I put my cards in two hard cases so I could split them up between the two lines. So, once I got out of line, I was free to head down to the field and try to get some of the pitchers out there. Joe ended up being the only guy that I got and I only had this one card in my case. But, that is alright since this is probably the best Joe Blanton card that I own.

Joe lasted in the Majors for thirteen seasons and saw time with the A's, Phillies, Dodgers, Angels, Royals, Pirates, and Nationals. Over that time, he amassed a 101-97 record with 2 saves and a 4.38 ERA. He last pitched in the Majors in 2017.