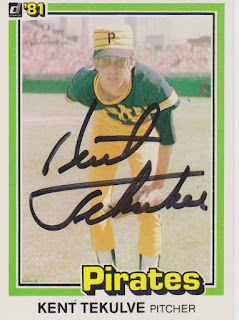 I got this card signed through the mail, but I went about it in a different way than usual. Rather then send this card to Kent's residence, I mailed it out last year to the Pirates Spring Training complex. I saw some returns coming from him from there and I gave it a shot and got my card back ten days later. While I have mailed cards to Spring Training for coaches and managers, this was the first time that I had ever sent one to a former player and got it back signed. Let's hope I can repeat that success this year with Ron Guidry.

Kent pitched in the Majors for sixteen seasons with the Pirates, Phillies, and Reds. He spent most of that time in Pittsburgh and became a staple in the Pirates bullpen. During his time with the Bucs, he went 70-61 with 158 saves and a 2.68 ERA. He won one World Series with them and made one All Star team.