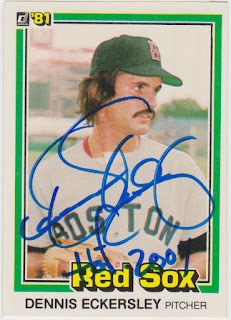 Here is a rarity for me these days with the '81 Donruss set. It is a card that was actually signed in-person. I got this card signed at the College World Series in 2014. AT&T always brings in former ballplayers to sign autographs during the opening weekend of the series. Most of the time, the player will only sign the 8x10 photograph that AT&T provides. I got lucky with Dennis, though, as he was signing everything that was given to him.

Some of the guys that I am missing from the set, that signed only 8x10s at the College World Series, are Dave Winfield, Johnny Bench, Rod Carew, Jim Rice, Bruce Sutter, Ozzie Smith, and Fred Lynn.

When I think of Dennis Eckersley, I do not think of him as a member of the Red Sox. He played for them from 1978-1984 and was a starter the entire time. He had four double-digit win seasons, including a career high of twenty in 1978. During his tenure in Boston, Dennis was 88-71 with a 3.92 ERA and 771 strikeouts and one All Star Game appearance in 1982. Those numbers include the final season of his career, which happened to be with the Sox in 1998.

In May of 1984, Dennis was traded to the Cubs in the deal that brought Bill Buckner to Boston.

I love that Dennis included the Hall of Fame inscription to the card. I do not remember asking for it, but I probably did considering that I did not get one on the 8x10s or the other cards that he signed.

Kind of awesome that you were able to get a Hall of Famer's autograph, but I agree with you - I don't think of Eckersley as a Red Sox player.