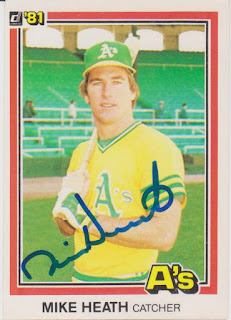 Next up is the Mike Heath card that I got signed through the mail nearly three years ago. I sent this card to Mike in April of 2014 and I had it back in just eight days.

Every once in a while back then, I would send a second, or sometimes a third, card along with the '81 Donruss card. Normally, the second card would be from the Pacific Senior League set or maybe a random traded set I had sitting around. I sent Mike's '86 Topps Traded card along with this one just because. Any more, though, I seem to rarely send a second card along with the '81 D card. Since I have fewer cards from the set to get signed TTM, I guess I am just a little more paranoid about them turning out to be a one per signer and then not returning the Donruss card to me. Since that set is my focus, I send it out alone.

Mike Heath had a fourteen year career with the Yankees, A's, Cardinals, Tigers, and Braves. He was mainly used behind the dish in the Majors, but was never really a team's primary catcher. He only started over 100 games in a season once as a catcher, but he did start the majority of the games for a few seasons with Oakland and Detroit. Most of the time, he seemed to be used in a platoon role.

You're really making progress with those 1981 Donruss cards

I sure am. At my rate, I will be posting these until the season starts.