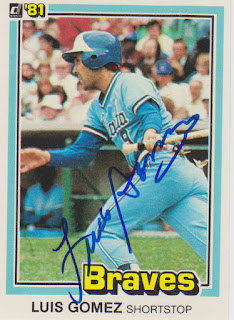 There was no 2017 Topps out at my local Wal-Mart, so I have time to post a card. When I sent this card out to Luis, I thought I would be posting it when I last posted some '81 Donruss cards in 2013. But, this card had a longer turnaround time, and it came back just a tad late to be posted on the last go around. I sent the card to Luis towards the end of 2012 and it took six months to make it back home.

Luis played in the Majors for eight seasons with the Twins, Blue Jays, and Braves. He was mainly a back-up infielder, though he was a starter for two seasons. For his career, he was a .210 hitter with no home runs and 90 RBI. With the Blue Jays in 1978, Luis started 153 games at shortstop. He hit .223 that season with 39 runs scored and 32 RBI.

Luis was a horrible base stealer. He had 6 stolen bases in his career and was thrown out 22 times. That was a success rate of 21.4%. Ouch! The Blue Jays can take most of the blame for that low success rate. During that '78 season, they sent Luis running twelve times. He arrived safely twice, or 16.7% of the time.