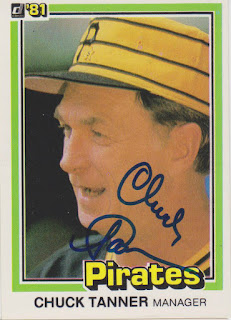 Here is the second of four '81 Donruss cards that my wife bought for me for Christmas this past year. This one features long time manager, Chuck Tanner, who passed away in 2011.

Chuck had played in the Major Leagues for parts of eight seasons with the Braves, Cubs, Indians, and Angels. He appeared in just 396 games over that time and hit .261 with 21 home runs.

Chuck got into managing after his playing career and managed four different clubs over nineteen consecutive seasons. He lead the White Sox, A's, Pirates, and Braves. Over those nineteen seasons, his clubs had five second place finishes and his 1979 Pirates team won it all. For his career, his clubs posted a 1352 and 1381 record. He won American League Manager of the Year with the White Sox in 1972.