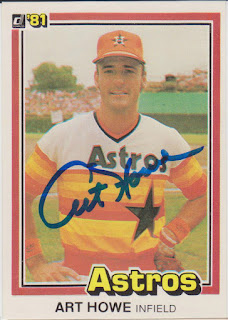 We go from a player turned manager for the '81 Donruss set to a player from the set that later became a manager. I wonder how many future managers are in this set. Off of the top of my head, I can only think of Bruce Bochy, Jim Tracy, Clint Hurdle, Bob Baylor, Dusty Baker, and Bob Boone, but I am sure there has to be a few more.

Art played for eleven seasons with the Pirates, Astros, and Cardinals. He got some regular playing time with the Astros, but was mainly a utility infielder throughout his career as he could man all four positions. He spent he most time at third base during his career while batting .260 with 43 home runs and 293 RBI.

After his playing days were over, he managed the Astros, A's, and Mets for fourteen seasons. Over that span, he had a 1129-1137 record. He made the playoffs three times with the A's and came in second place for the AL Manager of the Year Award for four straight seasons.

The Astro cards from this set look great when they are signed with a blue Sharpie.

Other players from the set that would go on to manage that I just looked up- Alan Trammell, Bill Russell, Cecil Cooper, Pete Rose, Larry Bowa, Paul Molitor, John Wathan, Jerry Narron, Dave Lopes, Hal McRae, Jim Essian, and Ken Macha. There might be a few more in there, but that is all I could come up with from my list of autographs from the set.