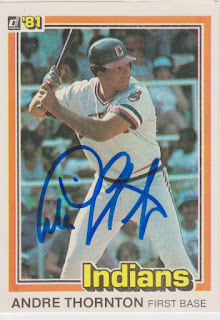 Here is a card of Indians slugger, Andre Thornton, that I got signed through the mail in 2014. It took Andre about three weeks to get this card back to me.

Andre played in the Majors for fourteen seasons with the Cubs, Expos, and Indians. The bulk of that time came in Cleveland as he was a regular there for most of his ten seasons on the team. Over his career, Andre had three 30 home runs seasons and two 100 RBI seasons and all of those came with the Indians. Since he was in Cleveland during the '80s, he obviously was on some bad clubs. Nevertheless, he continually put up good numbers on a regular basis there.

For his career, Andre logged 253 home runs and 895 RBI. He made two All Star teams and was 1-2 in his two at-bats in those games. He struck out against Steve Carlton in the '82 game and singled against Fernando Valenzuela in the '84 game.

I haven't got a clue what is going on with Andre's signature. For a guy that played in the '70s and '80s, it is unusual that all, or at least part, of his signature is not legible. I think I see the last letter of his first name and a "t" in the last name.