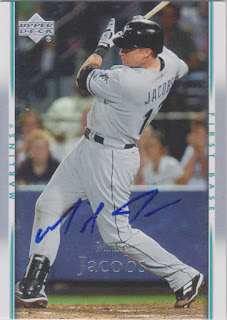 I am at card number 705 and am only about half way done with the 2007 Upper Deck set. How many cards were in this set?

Anyways, here is another card of former Marlins slugger, Mike Jacobs. I got this card signed at Royals Fanfest in 2009. I thought that I was prepping cards by that time, but maybe not as this one is a little bubbled up.

This is the fourth card of Mike Jacobs that I have posted on here and I have five more to go after this one. Like I said in the last Mike Jacobs post, he was a really good signer. If he is still playing, he probably still is a good signer.
at 1:59 PM