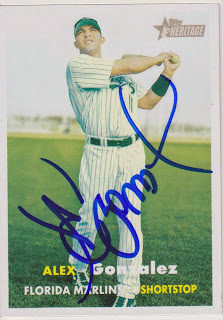 Here is a card that I got signed at Spring Training in 2013. We were at Camelback Ranch to see the White Sox host the Brewers and Alex was playing for the Brewers at the time. He signed one of three cards for me.

After a sixteen-year career, it appears that Alex's career has come to an end. During that time, he played with the Marlins, Red Sox, Reds, Blue Jays, Braves, Brewers, and Tigers. He spent the first eight years of his career with the Marlins before bouncing around the next eight years. With the Marlins, he made one All Star team and was a member of their 2003 World Championship team.

Alex finished his career a .246 hitter. His best season came in 2010, a season split with the Blue Jays and Braves. He finished that season hitting .250 while tying his single season home run total of 23 and having a career high for RBI with 88.

I like Alex's signature. You can tell that this one was a bit hurried as the Sharpie came off the card when signing the "l" in his last name. But, other than that, it came out looking good. He has a very stylish "A" to start his sig.
at 10:29 AM