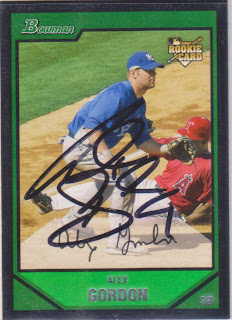 Here is the first of many Alex Gordon autographs that I will hopefully be posting on here for years to come. This one is one of the first ones that I got signed by him and that happened outside of the Royals parking lot in 2008. All that I remember about him back then was that he was not very talkative. He would come over and sign his one per person and look like he was not enjoying himself. You would ask him a question and he would only give yes or no answers. He seems to have opened up more over the past few years, though. While it is nearly impossible to 'graphs the Royals lot anymore, Alex has been more engaging the last couple of times I have seen him at Fanfest.

Alex Gordon is the best left fielder in baseball right now. He is a collective favorite in this household as we all refer to him as Al-Gor, our play on an A-Rodesque nickname. He has been an All Star the past two seasons and won Gold Gloves each of the last three. The one downside is that he could quite possibly be playing his final season in Kansas City. He has a player option with the club for next season, but I believe it is only for $12 million. I am sure that he could get more than that on the open market, so I hope the Royals make an effort to bring him back. For as much as they are charging for tickets this year, I would think that would not be a problem.

Alex played in the 2001 College World Series with Nebraska. While I was not running a College World Series bracket back then, I am now. So scroll down one more post and get entered. There are only three entrants so far, so it could be an easy win as of right now.
at 10:24 PM