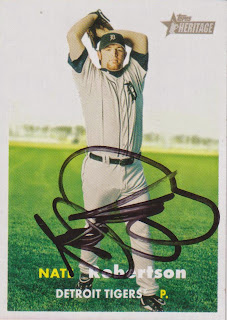 Here is a card that I got signed at a card show earlier this year. Rock's Dugout, the oldest card shop in Kansas, hosts a bi-monthly card show in Wichita. He tries to get local guys to come in and sign whenever he can and he just so happened to bring in Nate Robertson for the first show of the year this year.

Nate is retired from baseball now and is actually a part owner of the Wichita Wingnuts. Because of that, I always take a couple of cards of him to 'Nuts games just in case I ever run into him. I won't have to worry about that now, though, as I got all three cards I have of him signed at the show.

Nate actually pitched for the Wingnuts for a bit in 2012. I was hoping to make it down to a game during that time, but I was unable to. He made just three starts before signing with the Blue Jays.

Nate pitched last season with the Tigers AAA team before getting released in May. I talked to his brother last season, who just happens to be the Wingnuts GM, and asked him why he didn't pick Nate up. He said that Nate had retired. He pitched for the 'Nuts in 2012 just because he knew the Jays were needing a starter on their AAA team and he needed to be ready. But, since there wasn't anything looming in the near future for him last year, he was just going to enjoy his retirement.

Still, it would have been cool to see him pitch for the 'Nuts.

The Robertsons have quite an operation going in Wichita. Nate is the owner. Josh is the general manager. Luke is the pitching coach. Matt pitched for the team last year.
at 8:29 PM