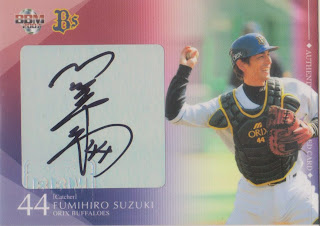 A few years back, I saw on Japanese Baseball Cards that a major Japanese card distributor was going out of business and was having a huge sale. Having never bought a pack of Japanese cards before, I could not pass it up. The cards were very reasonably priced and the shipping was not nearly as bad as I thought it would be. So, I picked up about a dozen packs. My hopes were to get some cards of guys that might make it to the States some day so that I would have cards for them to sign. So far, that has not been the case. But, I was pleasantly surprised to pull two autographs out of the packs.

This one features the light-hitting catcher, Fumihiro Suzuki. Fumihiro played pro ball in Japan for fourteen seasons with the Dragons and Buffaloes. He was mostly used as a backup catcher, though he was the main catcher for two seasons. He hit just .185 over his 501 games and had 3 home runs and 56 RBI. His best season was probably with the Dragons in 2000. That year, he hit .226 with a home run and 10 RBI in just 62 at-bats.

Fumihiro was also a member of the 2000 Japanese Olympic baseball team. He retired after the 2012 season.

How about this sticker autograph? People would freak out if Topps used something this big. But, with the Japanese script, maybe this is a must for the Japanese card companies.
at 11:04 AM