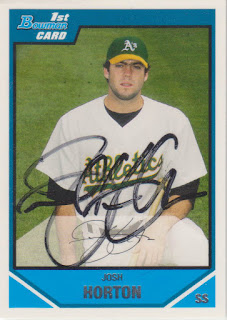 Here is a card that I got signed in Lancaster, California in 2008. My buddy, Dustin, and I made our initial west coast trip that summer and we took in four Major League parks and four minor league parks. Five of the parks we saw were in California and the last one we visited before we started making our way home was Clear Channel Stadium in Lancaster. Back then, they were the California League team for the Red Sox. I don't think I got any cards signed by the 'Hawks palyers, but I got a couple signed by the visiting Stockton Ports. This is one of those cards.

Josh played in the A's system for seven seasons. He was taken in the second round of the of the 2007 draft out of UNC. He made his professional debut that year with the Vancouver Canadians of the Northwest League. Josh did good enough there to get promoted to the Midwest League, where he finished his first pro season. In 2011, he got his first taste of AAA action as he played in 26 games for Sacremento. He hit just .218 at that level and found himself back in AA for 2012. He got two more tastes of AAA, but could only muster a .231 average at that level. The A's cut ties with Josh during the 2013 campaign and he finished the season playing for the Orioles AA affiliate. It appears that Josh retired after that season.

He finished his pro career a .277 hitter. He performed the best at the high-A level.

On the college baseball front, there were a couple of upsets last night. The number one national seed, UCLA, lost to Maryland. Bracket number one seeds TCU, Texas A&M, and Oklahoma State all lost as well. All four of those teams are still in it, but they have to win three straight games to advance to the Super Regionals.

So far, only two teams that were picked to go to Omaha have been eliminated. They are Lipscomb and Clemson.
at 10:53 AM