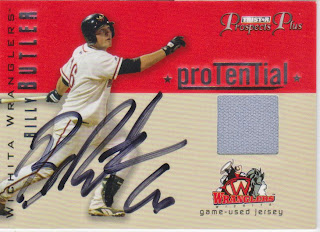 Here is the first Billy Butler autograph that I have posted on here. There will be many more to come after this one, but it might be some time before the next one pops up on here again. This one happens to be the last card that I got signed by Billy. He signed it for me at Royals Fanfest last year.

I really like this card as it shows Billy with my local Wichita Wranglers. The Wranglers had a Hell of team in 2006 with Billy and Alex Gordon in the lineup every day. Plus, they were managed by Frank White, so you would think that they wouldn't have any problem putting butts in the seats of Lawrence-Dumont Stadium. But, that wasn't the case as just under 178,000 fans went out to watch them that year. That season, they announced that they would move to Arkansas for the 2008 season.

I never made it to a Wranglers game in 2006. I was stationed in Georgia at the time and the one time I came home that summer, I went to a Royals game instead of a Wranglers game. But, I really wish the Wranglers were still in Wichita. I like the Wingnuts and I think they put a good product on the field. But, there is little comparison between the American Association and the Texas League.

Having said that, I am looking forward to going to my first Wingnuts game of the season in two weeks. While it is unlikely that there will be the next Alex Gordon or Billy Butler at the game, there will be some former Major Leaguers playing. Wichita signed Luis Hernandez and Lou Montanez for the season. So, if anyone out there needs something signed by them, just let me know.