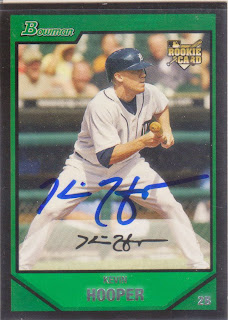 I believe that this is the fourth card of Kevin Hooper that I have posted on here. The first three all showed him as a Marlin, who he never played for at the Major League level. This is the first card of him as a Tiger, the lone Major League team he did suit up for.

Kevin had two very short stints in Detroit. He initially got called up in 2005 and he played in six games. He started one of those and was used as a defensive replacement in the other five. He got five at-bats that season and one hit, a single off of Minnesota's Terry Mulholland. In 2006, Kevin was a September call-up. That month, he played in eight games, all as a defensive replacement. He got just three at-bats that go around and went 0-3.

All totaled, Kevin played in 14 games with the Tigers and went 1-8 at the dish with a run, walk, and three sac bunts. He played left field, shortstop, second, and third and had just on error in 15 chances.

Kevin is currently the manager of the Wichita Wingnuts. He signed this card for me at a 'Nuts game five years ago.
at 10:41 AM