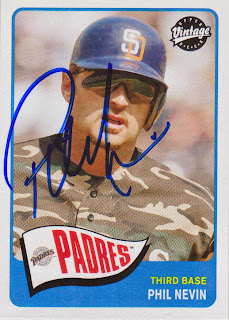 Here is the third and final card that Phil Nevin signed for me at Spring Training last year. Phil is the manager of the Reno Aces, the Diamondbacks AAA affiliate. He signed the cards for me after working out some of the Major Leaguers on the infield practice field. You can see the first card that he signed for me here and the second one here. You can see the very first Phil Nevin card that I posted here. That one was given to my by Rod, from Padrographs.

For whatever reason, I really liked this set when it came out. I had just graduated from college and I bought a lot of this set and the '03 Topps Fan Favorites packs. I had not discovered Topps Heritage yet, so this set seemed to fill that void. It is strange that I liked those sets then as they would not intrigue me that much if they came out now. I might buy a few packs of these, but I would stay away from Fan Favorites since there were no current players in the set. As an autograph collector, I would much rather get cards signed that were made during a player's playing days than something that was put out after his career was over.

But, that was not always the case. When I first got back into TTMing in 2008, I sent out three cards to former players from this set- Bobby Doerr, Jim Bunning, and George Kell. I just finally got around to finding a Bobby Doerr card from his playing days and got that one signed last month.

On an unrelated note, I must say that I have always loved the Padres camoflaged jerseys. It seems that anymore, just about everyone wears a camo jersey at some point. But that might not have ever been the case if the Padres had not started doing it on a regular basis. In 2001, I made my lone voyage to the National Baseball Hall of Fame. One of the things that intrigued me enough to snap a non-digital picture of it was a Padres camo jersey. Check it out! 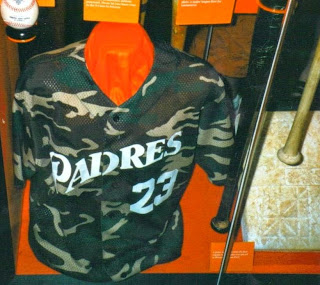 How cool is it that that just happens to be Phil Nevin's jersey?
at 9:51 PM