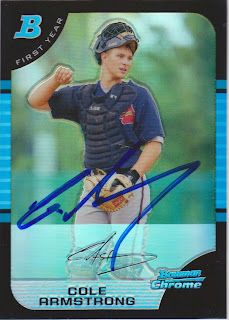 Here is another card that I got signed at a Wingnuts game in 2013. Cole was playing for the 'Nuts that season and I was able to get him to sign this card prior to a mid-season game.

Bowman cards are awesome for Wingnut games. Eighty percent of the time, if I have a card to get signed there of a player, it is a Bowman. Tristar and Topps minor league cards make up about eighteen percent with the last two percent being assorted cards. So, if it was not for Bowman, I probably would not go to as many Wingnut games.

Cole played in the minor leagues for eleven seasons. Originally drafted by the Braves, he played in their system for three seasons before being drafted by the White Sox in the minor league portion of the Rule V Draft. He then played for the Sox for five seasons. He played AAA one year, but spent the majority of the time at the AA level. He even played one full year of AA after his AAA season. He then played one year of AAA for the Angels and then one for the Marlins. He found himself in the American Association in 2013, his last season of pro ball.

I actually bought this card of Cole in 2010, three years before he became a Wingnut. He was playing for the Birmingham Barons the year I went down to see the Rickwood Classic. I was unable to get the card signed then, but it worked out when he came to Wichita.
at 7:03 PM