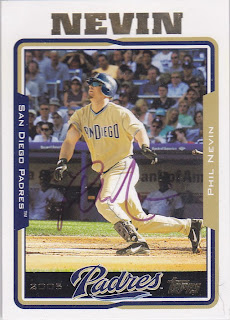 Here is the first of two Padrographs that I have from the 2005 Topps set. This one features the 1992 Golden Spikes winner, Phil Nevin.

Phil was the top ranked college player while with Cal State Fullerton in 1992. He did so well that season that the Astros drafted him with the first overall pick. Unfortunately for the Astros, Phil never lived up to his college performance and he only played 18 games with the Astros before he was traded to the Tigers. He played parts of three seasons in Detroit before being dealt to the Angels. The Angels kept him around for only a season before trading him to the Padres.

With the Padres, Phil finally found a home. He stayed with the Padres for six seasons and he had his best years there. In his first season, he reached double digit home runs for the first time when he had 24. His home run numbers climbed to 31 the follwing season and then reached 41 the year after that. That seaason, 2001, Phil also had career highs in RBI (126) and average (.306). Phil made his lone All Star team that season.

These days, Phil is the manager of the Toledo Mud Hens. It seems strange that a player that has played as recently as 2006 is now managing at the AAA level. He only managed in the independent Golden League for one season before taking over the Tigers AA team for one season. The Tigers must really think highly of him to have him managing their top farm team with only two years of managing experience.

I had the chance to get Phil's autograph in person a few years ago while I was at the College World Series. Phil was signing at the Nike store just down the road from Rosenblatt, but I didn't find out about it until just before the signing. So, I had nothing to get signed and the organizers didn't provide any pictures or anything for him to sign. So, I passed on that opportunity.
at 7:44 PM