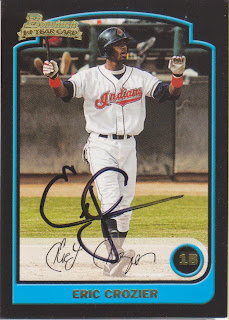 Here is another card that was sent to me by Ryan, from The Great Orioles Autograph Project. He sent the cards to me almost two years ago and I am still going through them on here.

When I got this card, I had no idea who Eric Crozier was. The name sounded familiar, but I still have no idea why. I figured that this was one of the many Bowman prospects cards of a player that spent his entire career in the minor leagues. That is not the case for Eric. Though the majority of his career was spent in the minors, he did get a cup of coffee with the Blue Jays in 2004.

Originally drafted by the Indians in the 41st round of the 2000 draft, Eric moved steadily up the Indians organizational ladder. By 2004, he had hit AAA and was doing well. In 84 games for the Buffalo Bisons, Eric hit .297 with 20 home runs and 53 RBI. He was then dealt to the Blue Jays just after the trade deadline and reported to their AAA affiliate in Syracuse. Though he hit just 1 home run over the final 25 games of the season, the Blue Jays still thought he deserved a look at The Show and brought him up as a September call-up.

Eric made his Major League debut on September 4th as a pinch hitter in the bottom of the ninth. With the Jays down 9-5, Eric pinch hit for Orlando Hudson with two outs and no one on. He struck out looking to Chris Hammond. Eric struck out quite a few times in his month in the Majors, 19 times in 33 at-bats to be exact. But he did bang out 5 hits, 4 of them for extra bases including 2 home runs. He finished his Major League career at the end of the month as a .152 hitter.

Eric played pro ball for eleven seasons. Most players that play that long get caught up in AAA. Eric spent most of his time in AA and the independent leagues. What kept him down was his strikeouts. He had 1121 K's in the minors compared to just 962 hits. But, he did make it to The Show and that is worth something.
at 8:45 PM