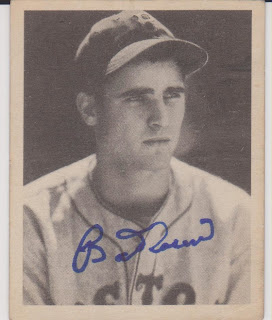 I got it back today!! It had only been gone for less than two weeks, but it seemed like a lifetime. And now I have my first signed card from the '30s and my oldest signed card.

It all began on Christmas Day when my lovely wife bought me this card. 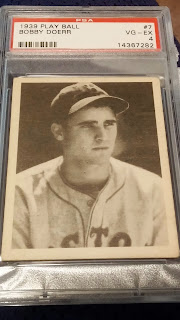 I had been asking her for Doerr's '38 Goudey for a couple of years, but that card was out of her price range. I figured that would probably be the case and told her that this one would work just as well. She found one for me and it showed up on Christmas Eve before I got home from work. She wrapped it up and then hid it underneath presents so I didn't know it was there. It was the last present opened on Christmas morning and I was shocked when I saw it. I really was not expecting her to buy me a card. I guess it shows that it doesn't hurt to ask.

Now that I had the card, the next step was unslabbing it. Luckily, there were plenty of videos on youtube about the subject and, after watching a few, I decided to give it a go. I was going to do it in front of my wife, but she couldn't bear to watch. She went to bed and told me not to make a mess. I got it out of its case fairly easily. 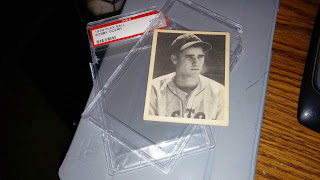 The next morning, the card was off in the mail. Little Mack was there to say goodbye. 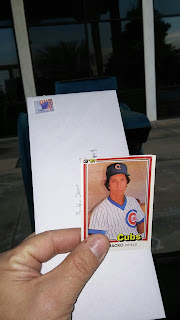 Today, I got home from work and I went and greeted my wife. She told me there was something for me by the TV and I instantly knew what it was. I went over there and picked up the opened envelope. Since she paid for the card, and knew what was in the self-addressed stamped envelope, she figured that she had first dibs at opening it. And I am completely fine with that. Then she says to me "If I had known it was going to be that easy to get it signed, I might have bought you the Goudey card".

That turned out very nicely! I'm pretty sure I would not have been brave enough to put a card that old into a TTM autograph request.