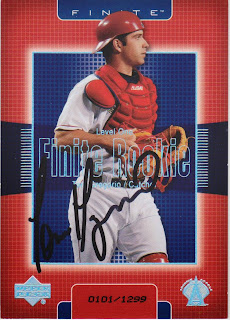 Here is a card that I got signed at a Royals game in 2013 when the Angels were in town. It was a slow day on the 'graphing front as all I got were Tom and the Angels pitching coach, Mike Butcher. Tom is the Angels bullpen catcher.

When people think of current bullpen catchers that played in the Majors, I am sure most people think of Jason Phillips (Mariners) and Mark Salas (White Sox). But, it turns out that Tom Gregorio got a cup of coffee in 2003 with the Halos. Though he was never much of a hitter (.242 in the minors), Tom was a September call-up that year. He made his Major League debut against the Royals as a ninth inning defensive replacement. He made his first start the next day in game two of a doubleheader. In his first big league at-bat, he hit a single off of Royals starter, Jamey Wright. He added one more single that day to finish 2-3.

He would get just one more hit the rest of the month, finishing the season at .158. He added a run and two RBI, as well. That was it for Tom's Major League career.