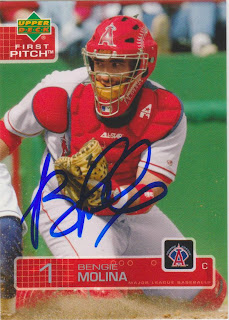 Back-to-back Angel catchers posts? What is this world coming to?

Yesterday, I posted a card of an Angel backstop that was a September call-up for the club in 2003. Here is the guy that got the bulk of the time behind the dish. What other guys caught for the Halos that year? Bengie's brother Jose and Shawn "Rootin'" Wooten. I am not if that was Shawn's nickname, but it sounded good.

I got this card signed at a Spring Training game last year in Surprise, Arizona. Bengie was the Rangers first base coach last season and I was lucky enough to get him to sign one of my three cards that I had. I did not do too well on the Rangers side as the only other sig I got was from Martin Perez. But, since I had never got an auto from Bengie, I was happy to add a new one to the collection.

Bengie played in the Majors for parts of 13 seasons with the Angels, Blue Jays, Giants, and Rangers. He was a .274 career hitter with 144 home runs. Though he never made an All Star team, he did win two Gold Glove Awards. His best season at the plate was in 2008 with the Giants when he hit 16 home runs and had career-highs in average (.292) and RBI (95).

With Ron Washington's departure from the team, it appears that Bengie lost his coaching job.