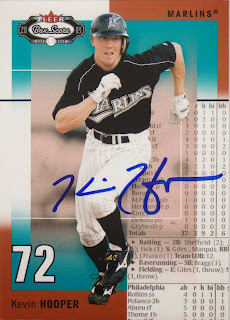 Here is the third Kevin Hooper card that I have posted on here. The first two were both acquired in 2010 and were posted that year. This one was acquired at a Wichita Wingnuts game in 2012. Kevin is the team's skipper and has been since their second season.

I do not get this set. It could be a neat concept if done correctly. But I do not get putting a random box score on a card and putting a random player on it and thinking that is a great idea. Never mind the fact that Kevin never played a Major League game as a Marlin. But, it appears that the box score on this card is from a Braves/Phillies game. How is that even relevant?

Kevin has managed the Nuts since 2009. Over that time, he has a .613 winning percentage. He has lead the team to the American Association finals in each of the past three years, winning it all last season. Strangely enough, the team won three different divisions with Hoop at the helm. They won the North in 2009, the Central from 2011-13, and the South in 2014. With all of the changes in teams, mainly the loss of southern teams, Wichita has gradually gravitated to the Southern Division. You have got to love independent baseball!
at 9:09 PM