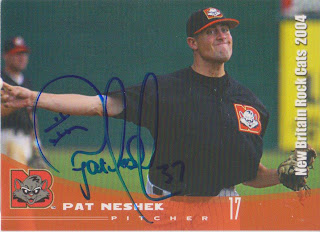 Here is one of my more recent autograph additions. Last month, I sent Pat his 2014 Topps Update All Star card to get signed. Since Pat is an autograph collector himself, I included three random autos with the card. I am pretty sure the ones I included were doubles that I got signed at Wingnuts games that were either on Bowman or Tri Star cards. In exchange for those cards, Pat sent me three signed minor league cards of him and signed my '14 Topps.

That is just the way Pat Neshek rolls. If you want an autograph from him, send him a card. He will sign it. Do you not own a card of him? That is not a problem either. Just send him any signed card and he will trade you for a signed card of him. Pat is by far and away the best current player in the autograph community. He is the best of all that greats that have come before him all rolled into one. He truly is an asset that everyone should take advantage of at least once. This just happened to be the second time that I have written to him. The first card I sent him was an '08 Allen and Ginter.

Like I said, Pat collects autographed cards. He recently finished a complete signed set from 1985 Topps. He is currently working on the '70 Topps set and the 2006 and '07 Topps 52 Rookies sets. You can see how he is doing on those sets, and possibly help him out, but checking out his website, On The Road With Pat Neshek. You can also follow him on Twitter: @PatNeshek.

With pitchers and catchers about to report, now would be a good time to send out a card to Pat. He is with the Astros this year, so send your cards to Kissimmee, Florida.
at 12:17 AM