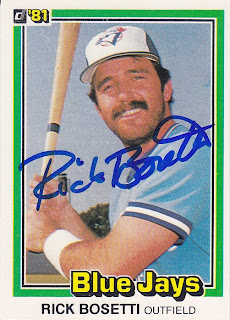 Here is the card that I sent to Rick Bosetti this past November. I got it back from him in nine days.

Rick played in the big leagues for parts of seven seasons. He saw a majority of his time with the Blue Jays, though he did see some Major League action with the Phillies, Cardinals, and A's, as well. In 1979, he was the Jays everyday center fielder. And by everyday, I mean that he started every game that season in center for the Jays. Because of the large workload, he obviously had a career year at the plate, setting most of his career bests that season including doubles (35), RBI (65), and average (.260). But, he also lead the league in some defensive categories, too. That season, he lead the American League in outfield assists (18), putouts by an outfielder (466), and outfield errors (13).

Rick was a .250 career hitter that tallied 17 home runs. His first home run, though, was a grand slam that tied the game in the top of the eighth inning.

According to Wikipedia, Rick's goal was to urinate in every outfield in the American League. Now that is setting some high standards!