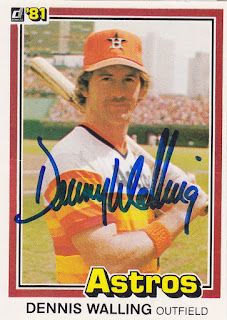 Next up from the '81 Donruss set is Dennis (AKA Denny) Walling. Denny played in the Majors for eighteen seasons with the A's, Astros, Cardinals, and Rangers. He spent the bulk of his career in Houston and played both corner infield and outfield positions as well as a bit of center field. He was basically a fourth outfielder/fifth infielder type that racked up 456 appearances as a pinch hitter in his career.

I sent this card to Denny at the end of January and I had it back a week later.

Nice-looking autograph on a colorful card. :-)