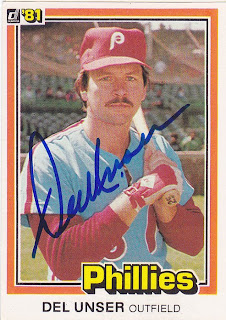 Here is a card of Del Unser that I got signed through the mail in December. It took two weeks for this one to make it back home.

Del played in the Majors for fifteen seasons with the Senators, Phillies, Mets, and Expos. He was an everyday outfielder for all of those teams at one point or another and he played a pretty good center field. In 1968, he had the most assists by an outfielder with 22 and he lead the National League in assists by a center fielder for three straight seasons in the early '70s. He was a decent enough hitter, too, hitting .258 for his career with 87 home runs. He even lead the American League in triples in 1969 when hit hit eight of them.

Del finished second in the 1968 Rookie of the Year Award to the Yankees Stan Bahnsen.