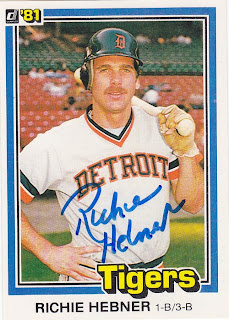 It is late and I'm stuck at the airport in Houston waiting on my flight home. So, I figured that I might as well try writing up another post on my phone. So, here it is. Richie Hebner.

Richie had a long Major League career, spending eighteen seasons in the league. He spent time with the Pirates, Mets, Phillies, Tigers, and Cubs. He played in over a hundred games a season for twelve straight seasons, which included the entire decade of the '70s. He never made an All Star team despite having a few solid seasons. He had career highs of 25 home runs as a Pirate in '73 and 82 RBI as a Tiger in '80. For his career, he had 203 home runs and he hit .276.

I sent this card to Richie in November and I had it back sixteen days later.

This a cool little project you got going on Donruss 81 is a really nice set. Love the blog btw I just started following check my blog out http://truschoolsports.blogspot.com/ join the site if you like what you see. Good luck on the project man.