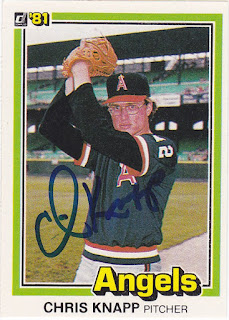 This is the second card of Chris Knapp that I have posted on the blog. I posted the first one nearly two years ago when I was showing off cards I unlocked in the Topps Million Card Giveaway. I unlocked Chris' '80 Topps card and I sent it out to him without realizing that he was also in the '81 Donruss set. Whoops.

But, I made up for it this past November by finally sending him his '81 Donruss card. I had it back about a week later.

Chris has shortened his signature since the last time I wrote to him. On the first autograph, you could make out every letter of his name. On this one, his last name remains the same while his first name is shortened to just the first two letters and maybe the dot to an invisible "i".