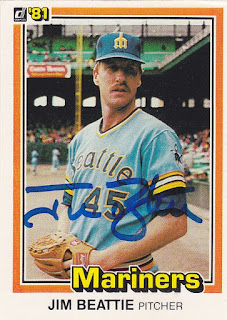 Here is the Jim Beattie card that I got signed through the mail in December. I sent this card to him at the end of November and I got it back the day after Christmas. Gotta love TTMs. They are like sending gifts to yourself.

Jim pitched in the big leagues for nine seasons with the Yankees and Mariners. He had a losing record every season he pitched except for 1981 when he only appeared in 13 games. He was a double digit loser four times and winner twice. He struck out a 100 or more batters three times in his career, with a career high of 140 in 1982. That season was probably the best he ever pitched, though he finished the year with just a 8-12 record and a 3.34 ERA. I'm sure his record would have been better if he wasn't pitching for a team in its fifth year of existence.

Jim pitched in one World Series game and it came in his rookie season of 1978 with the Yankees. In that start, Jim ended up pitching a complete game while surrendering two runs and striking out eight Dodgers.