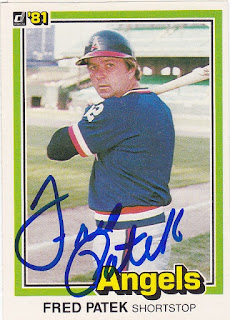 Here is the '81 Donruss card that my dad got signed for me at All Star Fanfest last summer. Usually my dad and I are in the same line, but there were a couple of times over the three days that we went where we had to split up. One of those times was during the last signing of the week.

It was on Tuesday afternoon, the day of the All Star Game. Freddie Patek and Hal McRae were signing at the same time, but at different locations. Both guys are Royals Hall of Famers and they both had cards in this set. There were not many people left at Fanfest at that point, so we could have gone through each line together fairly easily. But, like I said, it was the day of the All Star Game, and I wanted to get to the park early to try to get some autographs. So, we split up and we both were towards the very front of our lines. We each got an '81 Donruss card signed and we met up and took off for the K.

This was the first time that I had got an autograph from Freddie. It is too bad that I could not have gone through the line with my dad to get a Royals card signed. Maybe next time.

The worst part about it was that, although we got to the park super-early and were some of the first ones in, we did not get a single autograph there. They would not let anyone into the lower seating bowl if they did not have a ticket for seats down there. So, I basically skipped out on getting a Freddie Patek Royals card signed for nothing.

But, I did get a cheesy briskit-acho while I was standing around not getting autographs at the park. It is a rather new dish at the K and it is freaking amazing. It is tortilla chips covered in cheesy corn, baked beans, brisket, barbeque sauce, and topped with cole slaw. If you ever make it to a game in Kansas City, it is a must have.

Z, that's a sweet sig and it looks awesome on that card! Congrats.