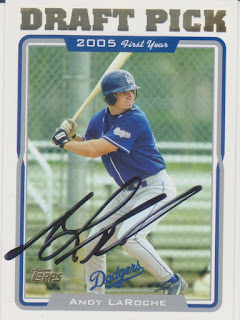 Here is the first of several cards that I got signed by Andy LaRoche over the past three years. Andy played a partial season with the Wichita Wingnuts in 2015 and I got him on two or three occasions in Wichita. He then played for the Kansas Stars for the two years they were around and I got him once more that way. No matter how many cards you had of Andy to get signed, though, he was a strict two-per guy.

This was one of the last cards that I got signed by Andy during his tenure with the Wingnuts. At one point during that season, I had stopped by my dad's house to look for something and I found a blaster box full of cards from 2005 that I did not know I had. In it was this card and I was able to get it signed at a playoff game that fall.

Andy's tenure with the Dodgers lasted 62 games over two seasons. During that time, he hit just .217 with 3 home runs and 16 RBI. At the trade deadline in 2008, he was dealt to the Pirates in the three team trade that landed Manny Ramirez in Los Angeles.

On a curious note, the Royals signed Andy to a minor league deal this past season even though he had not played affiliated ball since 2014. He was assigned to AAA Omaha, but was on the disabled list the entire season. What makes it even more odd was that he was on the Louisville Stars roster to play in the Bluegrass World Series in August. Whether or not he appeared in any of those games, though, I do not know.
at 10:11 AM