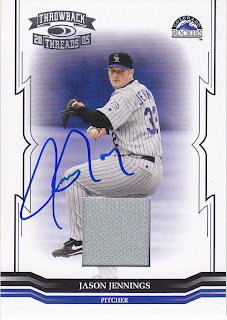 Here is the first of three cards that Jason Jennings signed for me in Amarillo this past summer while he was playing for the Grand Prairie AirHogs. Prior to the game, Jason was out on the field doing his workouts. He was wearing shorts and a t-shirt with no number on it, so I was unsure whether that was him or not. Eventually, I asked one of his teammates who the guy on the field without a uniform on was and he confirmed to me that it was Jason. So, when Jason finally left the field for the clubhouse, I asked him to sign and he was happy to do so.

Like I said in the last Jennings post, this card came out looking great. The wide white border and minimal background leaves plenty of room for a signature. Because of that, I may need to start looking for more cards from this set in the future.

Yesterday, I got my quickest TTM return ever. I sent the card out on Tuesday and I had it back on Saturday. I probably would have had it back on Friday, but that was Veteran's day and there was no mail. It obviously helped that the card only had to travel about one hundred miles from my home. But nevertheless, this is one turnaround that I will probably never beat (unless I move to Florida).
at 10:00 AM