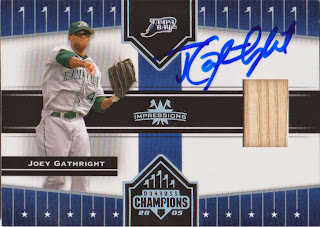 Here is the second card of Joey Gathright that I have ever posted on here. Joey spent some time with the Royals, so I have a few sigs from him. But this one I picked up a little more recently. In 2013, Joey was playing for the other Kansas City team, the American Association's T-Bones. He signed three cards for me before a game in Wichita that summer.

Joey last played for the Royals in 2008 and all of my prior autographs from him were obtained that season. Back then, all his signatures looked like his initials. I was shocked when I got these cards signed in Wichita and he had more of an actual signature. I was not expecting that. Here is the first card I posted of him in 2011 to compare.

Two bat cards in one week? I doubt that will ever happen again.

Apparently, Joey notified the public yesterday, via Facebook, that he has officially retired from baseball.
at 12:41 PM