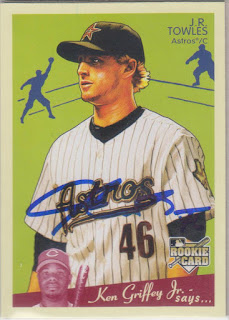 Here is a card that I got signed at a Round Rock Express game in 2008. JR was the starting catcher that night for the Express and would not sign on the way to the field, since he had to get his pitcher warmed up. But, on the way out, he stopped and signed for everybody after the game. He signed all three cards that I had of him.

When JR initially got called up in 2007, he went on a mini-terror. Though he played in just 14 games and had just 40 at-bats, he would hit .375 with 5 doubles, 1 home run, 12 RBI, and only strike out once in the process. Unfortunately, he could never replicate those numbers again.

JR signed this card in about the worst spot possible. But, what are you going to do?
at 6:44 AM