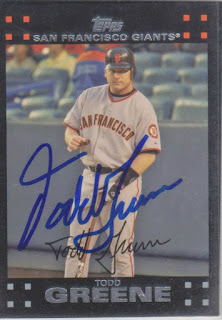 Here is the third and final card that I got signed by Todd Greene in 2009. Todd signed for me twice that summer, once in Kansas City and once in Baltimore. He was the Rays quality assurance coach at the time. I posted the first card from Baltimore in 2009 and it can be seen here. The lone card from Kansas City was posted in 2011 and that one can be seen here. This one was signed along with the first one while I was in Baltimore in September of 2009.

As far as I can tell, Todd only coached with the Rays for one season. After 2009, he got into scouting. He scouted for the Mariners for a few years before joining the Diamondbacks in 2013 as a scout and a special assistant to the general manager. But, according to some, he is apparently a Major League managerial candidate. That is news to me, but I just found this article from Baseball Essential that backs that up. According to it, Todd would be a cross between Mike Sciosca, Mike Matheny, and Joe Maddon. It will be interesting to see if he gets a shot at the Majors without any minor league managing experience.

I had no idea, but, according to that Baseball Essential article, Todd caught the ceremonial first pitch that president George W. Bush threw out prior to game three of the 2001 World Series.
at 10:30 PM