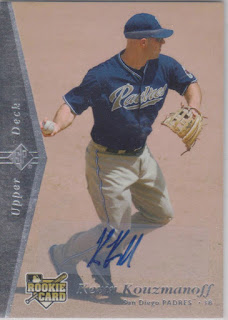 Here is another card in the long line of Padrographs that Rod has sent me. Rod sent me my initial Padrographs in 2008 and this was not one of those. This one came from Rod in 2011. To date, this is the only card that he has sent me that features a sticker autograph.

Kevin Kouzmanoff played for the Padres for parts of three seasons after coming over from Cleveland for Josh Barfield. He was the everyday third baseman for San Diego while he was there and he put up some decent numbers. He consistently hit around .260 and had at least 18 home runs, 30 doubles, and 74 RBI every year for the Friars. He topped off with 23 home runs in 2008 and 88 RBI in 2009.

Then, prior to the 2010 season, he was dealt to the A's, with Eric Sogard, for Scott Hairston and Aaron Cunningham. His numbers slipped a bit in his first season back in the American League as his average dipped to .247. But, he still hit 16 dingers and 32 doubles while driving in 71. That was his last season as an everyday player.
at 8:13 PM

I really expected Kouzmanoff to have a longer career as a regular player.

So did I. I can't believe he did not get a real shot last year after the way he played for two weeks in Texas.