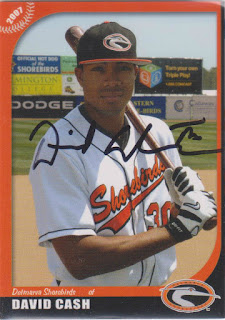 The next few posts are all going to be minor league or winter ball cards and we are going to start off with this card of David Cash from the Delmarva Shorebirds Grandstand set. This card was sent to me by Ryan, from The Great Orioles Autograph Project, two years ago.

David Cash had a short professional baseball career. He was drafted by the Orioles in the 40th round of the 2006 draft out of Florida. The O's had drafted him three years prior to that in the 21st round, but he obviously chose the college route. His draft stock sure did drop over that time.

He made his professional debut in the New York Penn League in 2006 and did well. He hit .297 in the 30 games he played in and had a home run and 12 RBI. He was bumped up to Delmarva the next season and hit .262 with a home run and 51 RBI. He must have got hurt the next season as he was limited to just 17 games, all with Delmarva. In 2009, he was bumped up to High-A Frederick and he hit just .219 in 69 games. That was the last season David played ball.

David sure has an interesting signature. His first name looks pretty normal. But, I have no idea what is going on with his last name.
at 10:49 AM