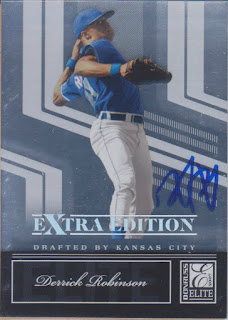 Here is a card of Derrick Robinson that I got signed at the same Wilmington Blue Rocks game as the Bryan Morris card I last posted. The only difference was that Derrick was playing for the home team.

Derrick spent most of 2013 in the Major Leagues with the Reds. I had no idea that was the case until I pulled his card out of 2013 Topps Update. By that time the Royals had given up on him and I figured that he did not really have a shot at making it. I guess it's a good thing I am not a prospector.

Derrick played in 101 games that year, but he only started 37. He pinch ran 6 times and pinch hit 36 times. He hit a respectable .255 with 7 doubles, 3 triples, and 8 RBI. The one stat, though, that surprises me is that he only stole 4 bases and it took him 9 attempts to make that happen.

When Derrick was a prospect with the Royals, the one thing he had going for him was speed. He stole 50 or more bases for four years straight in the minors, topping off at 69 for the Blue Rocks in 2009. The guy had speed, he just had problems getting on base. Then, he made it to the Majors and hit for a higher average there than his career minor league mark, but he couldn't steal any more. I never would have guessed that.

After 2013, the Reds let Derrick become a free agent and nobody picked him up. He sat out all of 2014 before the Nationals signed him for this season. He spent the majority of this season back in AA and he is hitting .250 heading into the final week of the season. He has stolen 17 bases on 26 attempts.
at 10:07 PM