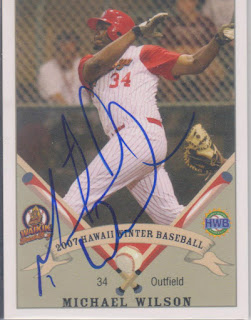 Here is an oddball that I found on COMC this year for a Wingnuts game. Mike was playing for the Winnipeg Goldeyes at the time and I could not resist pulling the trigger on this unique card for $1.25.

But, then I got to the game and I was a little worried. I pulled up the Goldeyes roster and Mike was not on it any more. So, I switched over to the American Association's transactions page and found that he had signed with a Mexican team that day. I soon found out from some of the players that he was still in Wichita and at the ballpark, but I never saw him leave the clubhouse prior to first pitch. I started scouring the stands, thinking he might have been there in his regular clothes, but to no avail. Then, after an inning of play, Mike came out of the clubhouse and took a seat in the dugout. I had to wait until after the game, but I was able to get my two cards signed by him.

The Hawaiian Winter League lasted only three seasons, from 2006-2008. It featured up-and-coming talent from MLB and the Japanese leagues. There were only four teams in the league and they shared two ballparks. As far as I can tell, only the Waikiki BeachBoys put out a card set in 2007. There are still a few of the cards on COMC, but there is nobody available that I have actually heard of.

Just in case you are wondering, there is a white border on the top of the card. For some reason, my scanner decided to chop it off.