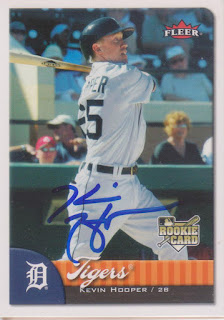 Here is the fifth Kevin Hooper card that I have posted on here. Kevin is the manager of the Wichita Wingnuts and all of the cards I have of him were signed at Nuts games, except for this one.

Every year, the Nuts and Wichita's hockey team, the Thunder, hold a "Nuts and Bolts" promotion. At the Nuts game, it will be hockey themed with a player or coach from the Thunder there to throw out the first pitch. At the Thunder game, it is just the opposite. I happened to get this card signed at a Thunder game about six years ago when they still played at the Kansas Coliseum.

I decided to go to the "Nuts and Bolts" game that year and I took two baseball cards with me- this one and one of Nate Robertson, a part owner of the Nuts. It just so happened that Kevin was the one there representing the team and he was out on the ice for the ceremonial puck drop to start the game. I waited for Kevin to leave the ice and got him to sign my card then. I had a cold at the time and had a dry throat and was hoarse, so I had to call for him a few times before he heard and came over. But, I finally got him and this is the only baseball card that I have ever gotten signed at a hockey game.
at 8:21 AM