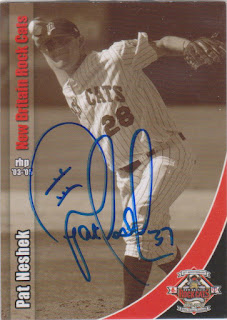 This is probably the longest title of any post I have done yet. I always thought the longest title would have Hollandsworth or Saltalamacchia in it. Turns out I just needed to post a minor league 25th anniversary card.

Earlier this year, right before Spring Training started, I sent Pat Neshek his 2014 Topps All Star card to sign. Since it is Pat, I included three signed cards that I had extras of. In exchange for those three cards, Pat sent back the signed All Star card was well as three minor league cards that he signed for me. This is one of those cards. I have already posted the other two and those can be seen here and here.

By Pat's standards, he is having an off year this season. He has pitched in 61 games and he has a record of 3-6 with a save and a 3.46 ERA. That ERA is about a half a run over his career ERA. It probably doesn't help that he has to pitch half of his games in little ol' Minute Maid Park. But, that is what he signed on to do. If the Astros do not blow it, at least he has a chance to pitch in the postseason this year.
at 11:30 PM