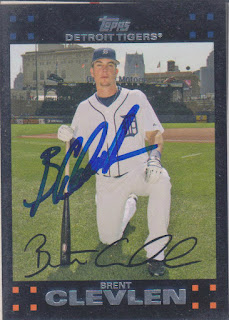 Here is the third and final Brent Clevlen card that I have to post on here. All three were done this year, with the first one, his 2002 Bowman, being posted back in January. The second one, his 2006 Topps '52, was posted in May. The first two signatures were obtained at Wichita Wingnuts games and this one is no different.

When I posted the last card of Brent, he was playing down in Mexico at the time. After the Mexican League season ended, he returned to Wichita to help them on their postseason push. After batting .301 in Mexico, Brent made it back north in time to play in eleven American Association regular season games. Over that stretch, he hit a whopping .444 with a home run, 5 doubles, and 9 RBI while helping the Wingnuts win their fifth straight division title. His hot finish cooled off in the playoffs, though, as the Nuts lost in the first round while Brent went just 2-21 in the series.

The photo on this card is kind of rare for Topps any more. While it is not uncommon to find a posed shot in a Topps product, most of those shots are taken at Spring Training. This posed shot is taken in Detroit.
at 11:43 AM