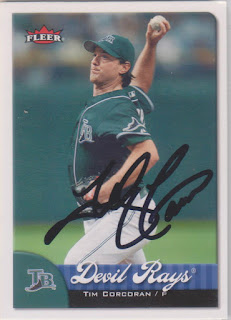 Here is a card that I got signed at a Round Rock Express game in 2008 while Tim was pitching for the visiting Albuquerque Isotopes. The Express have a sweet autographing set-up where the players have to walk across the left field concourse to get to the field. That is where I got Tim when he signed this card.

Tim pitched for the Rays for parts of three seasons. He was used as a starter and a reliever and he logged 130.1 innings in the Majors. Over that time, he went 5-9 with a 4.97 ERA. All of his decisions came in 2006, the only year he started games. He pitched 90.1 innings that year and had an ERA of 4.38 with 59 strikeouts.

Even though 2008 was the last time Tim pitched in the Major Leagues, he continued to pitch in the minor leagues through the 2013 season. In all, he played for sixteen seasons and logged 1272 innings of work.