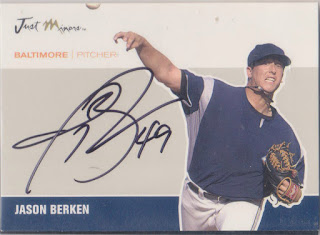 Jason pitched in the Majors for parts of four seasons. He mainly played for Baltimore, but he did have a brief stop with the Cubs in 2012. Over those four seasons, Jason pitched 248.2 innings, splitting them almost equally as a starter and a reliever. He holds a career 10-20 record with a 5.36 ERA and 163 strikeouts. His best season was his first season coming out of the pen for the O's in 2010. That year, he was 3-3 with a 3.03 ERA.

Jason still pitches and has spent the past three seasons playing AAA for three different organizations. He just finished up the 2015 campaign pitching for the Phillies AAA team in Lehigh Valley. He went 5-8 with a 4.61 ERA for them.
at 9:42 PM