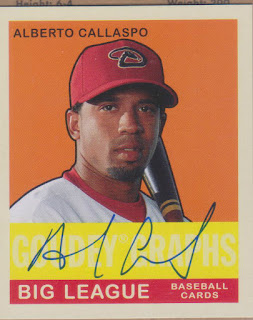 Mike Jacobs was looking lonely in my binder as the only 2007 Goudey card that I had signed. So, to make him feel a little better, and to add another signed card from this great looking set, I picked up this signed Alberto Callaspo card from COMC for about two bucks. An on-card autograph from this iconic looking set cannot be beat, especially for two dollars.

This is the fourth card of Alberto Callaspo that I have posted on here. The first three were all obtained in 2009 while Alberto was with the Royals. I posted the first two of those in 2010 and then it was a couple of years before I got around to the third one.

Since leaving the Royals, Alberto has played for the Angels, A's, Braves, and Dodgers. He spent three and a half seasons with the Halos before being dealt to the A's at the trade deadline in 2013. He played in Oakland through last season and then signed on with the Braves during the offseason. He played there for a couple of months before being dealt to the Dodgers in May. His stay in LA was barely longer than his tenure in Atlanta as the Dodgers released him three weeks ago.

It will be interesting to see if Alberto can catch on with another team next season. He will be thirty-three then and his offensive numbers have been on the decline since he maxed out as a Royal in 2009. That year, he hit .300 with 11 home runs and 73 RBI.