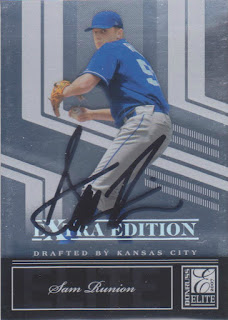 Here is the second card that Sam Runion signed for me at the Burlington Bees game in 2009. The first one was his 2007 Bowman card and that one can be seen here.

When I posted that first card, I talked about Sam's time in the Royals system, which lasted through the 2013 season. After that, he was picked up by the Rays, but lasted with their AA team for 13.1 innings. They cut him loose and the Nationals picked him up and he has pitched with them ever since.

Last year, he spent his season at three different levels of the minors ranging from High-A to AAA. He only pitched in 27 games, all relief outings except for one. So, he may have been having some kind of arm issue.

This year, though, he pitched in 48 games split between AA and AAA. He had a good season, going 6-5 with 4 saves and a 2.91 ERA. He struck out 60 in 65 innings of work. Unfortunately, it was not good enough for him to get the call to the Majors. But, there is still time for him as he is on twenty-six years old.