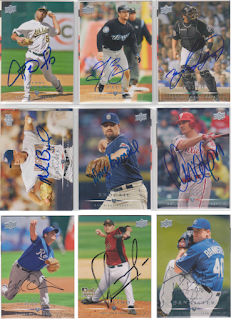 There are nothing but pitchers and catchers in this post.

Lenny Dinardo- Lenny signed this card for me before a game in Minneapolis in 2010 when he was with the Royals. It was at the final regular season series at the Metrodome.

Gregg Zaun- Lenny signed for me during batting practice at the K in 2009. He was with the Orioles at the time.

Miguel Olivo- I got this card signed by Miguel after a Royals game in 2008. He signed from the Royals parking lot.

Mike Bacsik- I got this card signed at a Wichita Wingnuts game in 2011. Mike was the starting pitcher for Ft. Worth that night and would not sign before the game. But, he came through afterwards, despite getting yanked in the first inning of the contest.

Doug Brocail- Doug signed this card for me at an Astros pre-season game at Minute Maid Park in 2009. Since it is dark picture, I thought that I would give the silver Sharpie a try. I did not like the results. Luckily, he was willing to go over it in blue for me.

Chris Coste- Last year, Chris got appointed to the coaching staff of the Fargo Moorehead Redhawks. So, I made sure to hit up a Wingnuts game while they were in town so I could get three cards signed. My two year old also got a card signed and he was thrilled as can be with it.

Kyle Davies- This is one of the many cards Kyle signed for me at the Royals parking lot in 2008.

Felipe Paulino- Felipe signed two cards for me at a Round Rock Express game in 2008. His unprepped '08 Topps card came out looking much better than this one.

Brian Bannister- Speaking of cards that came out looking bad, this one may take the cake. I am sure glad that I learned about prepping glossy cards at some point in 2009. This one was signed at a Royals game in 2008. He signed it after throwing 120 foot curveballs to Kyle Davies.
at 5:46 PM